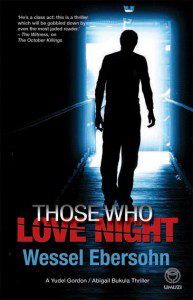 Synopsis of Those Who Love Night by Wessel Ebersohn

Those Who Love Night is the second book in the series. The October Killings is the first book and the third book is The Top Prisoner of C-Max

When Abigail Bukula, a young lawyer in the South African Justice Department, learns that the secret son of her aunt, who died in a massacre years ago, has been arrested by the Zimbabwean government, she races to his aid. She’s as determined as ever but perhaps a bit naive as well. Accused of being a part of the so-called Harare Seven, her cousin is being held as a political prisoner in the country’s most brutal prison.

With only an eager young lawyer as an ally and a director of the country’s intelligence agency either helping her or setting her up, Bukula will not leave without winning her cousin’s freedom and learning what really happened to her aunt so many years ago. By cunning, by bribery, by sheer audacity—and with the help of her friend prison psychologist Yudel Gordon—Abigail is determined to prevail in Those Who Love Night, Wessel Ebersohn’s explosive follow-up to his critically acclaimed series debut, The October Killings.

Reviews of Those Who Love Night

Zimbabwean mystery crackles with suspense – Crime and politics in sub-Saharan Africa keep a tight hold on readers of Those Who Love Night, a truly fine mystery by acclaimed author Wessel Ebersohn. This tense, elegantly written narrative is the second in a series starring Abigail Bukula, a young South African lawyer in her country’s Department of Justice.

Abigail Bukula, introduced in The October Killings (2011), returns in this intense story that reaches back into Zimbabwe’s violent past. An accomplished lawyer and rising star in the South African Justice Department, Abigail is shocked to learn that she has a cousin, Tony, whom she never knew existed and that he has been imprisoned in Zimbabwe as part of the activist Harare Seven. With the aid of an idealistic lawyer, she determines the best course of action to procure the young activists’ release from one of the government’s most notorious prisons, but government and prison officials claim they are not even holding the group. She is joined in her efforts by brilliant prison psychologist Yudel Gordon and seems to have gained the favor of one of the secret police’s high-level bureaucrats, Jonas Chunga. But what does Chunga really want from her, and why is she so willing to put her marriage vows aside? Like fellow South African Deon Meyer, Ebersohn excels at depicting the treacherous politics of an unstable country, one in which the search for justice is always fraught.

Looser and more engaging than Abigail’s debut (The October Killings, 2011, etc.), but just as committed in its anatomy of the unending legacy of apartheid.

Full review of Those Who Love Night by Kirkys Review

Anne Corey from Reviewing The Evidence

The repression of the populace in Zimbabwe is the focus of this riveting novel by South African writer Wessel Ebersohn. Abigail Bukula, a South African lawyer, is pulled into a harrowing situation in Zimbabwe when a lawyer from Harare contacts her and pleads for her help. A cousin of hers, whom she did not know existed, has been arrested, along with several others who have opposed the dictatorial regime. A brutal secret government organization called the CIO has most likely taken them but denies any knowledge of their whereabouts.

Abigail is in her thirties, beautiful, black and rich since she is married to a wealthy newspaper owner. She suspects her husband of infidelity and also feels pressure from forces within her own government. Although initially reluctant to get involved, she eventually decides to go. Once in Zimbabwe, she meets the lawyer, Krisj Patel, who had called her. She realizes how poor and desperate he is, and how poor and desperate and starving all the people of this country are. She also meets the head of the CIO, a man named Jonas Chunga. Something instantly occurs between them and the attraction is palpable. Although the people who are trying to free Tony treat Chunga with great fear and loathing, Abigail fights with herself against this strong physical attraction to a man she knows she must hate.

A dear friend and colleague, Yudel Gordon, comes to her aid and together they must plot how to proceed. Although they know that the government is lying to them, the truth is not simple to extract as other members of the anti-government group are imprisoned and killed. Chunga is a complex character and Abigail has many pressures on her, including her marriage and the dawning realization of how her extended family is involved in the Zimbabwe events.

The oppressive regimes associated with Germany during WWII and also Russia during the Cold War are quite familiar to fiction readers. Tales of people of these eras trying to fight against secret government organizations that kidnap, torture and kill with impunity those who oppose them are the setting for many novels. These eras may intrigue us but we know they are in the past. The story Ebersohn tells of strongmen without limits and people who are “disappeared” into horrific prisons in modern-day Africa is likewise fascinating but, sadly, a contemporary story. Many of us are unfamiliar with the horrors of these regimes, so this book provides an eye-opening experience as well as a suspenseful one.