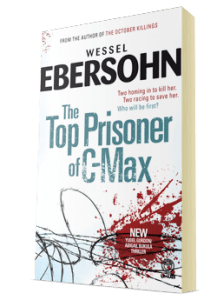 Synopsis for The Top Prisoner Of C-Max by Wessel Ebersohn

This is the third novel in the series. The first novel is The October Killings and the second novel is Those Who Love Night

Enslin Kruger is a dying man, but he is the top prisoner in C-Max prison, and must name his successor. This means blood. Kruger sees an unexpected opportunity to achieve this and at the same time exact revenge on his old nemesis, Yudel Gordon. He will anoint as his heir the man who slaughters Gordon’s protégé, the beautiful Beloved Childe.

A race ensues, by road and rail, from Pretoria to Cape Town… and by the time Gordon gets a whiff, it is already hopelessly late. To save Beloved, Gordon and his associate Abigail Bukula must figure out what the would be killers are up to, and quickly.

Tiffany Markham says this of The Top Prisoner Of C-Max

I’ve said before that I’m not a wild fan of local crime fiction. But Wessel Ebersohn was the writer who converted me, so it’s highly appropriate that I’m reviewing his latest offering. (And, although The Top Prisoner of C-Max is the sequel to Ebersohn’s The October Killings, I’ve not read the latter and I still enjoyed this book thoroughly.)

To begin with, The Top Prisoner of C-Max brings back oddball Jewish psychologist, Yudel Gordon – who fascinated me in Those Who Love Night – and pairs him with talented lawyer Abigail Bukula. There’s also the improbably named Beloved Childe, an American prisons prodigy, and a cast of highly charged, overly politicised, brightly colourful and deeply scary characters in the post-1994 Dept of Correctional Services.

The story is packed with chases, subtle in its violence and authentic in its dialogue. What’s also interesting is that this is the latest of six thrillers featuring Yudel Gordon, the first of which was penned in the 1980s. My, my – how times have changed for the character and his allies.