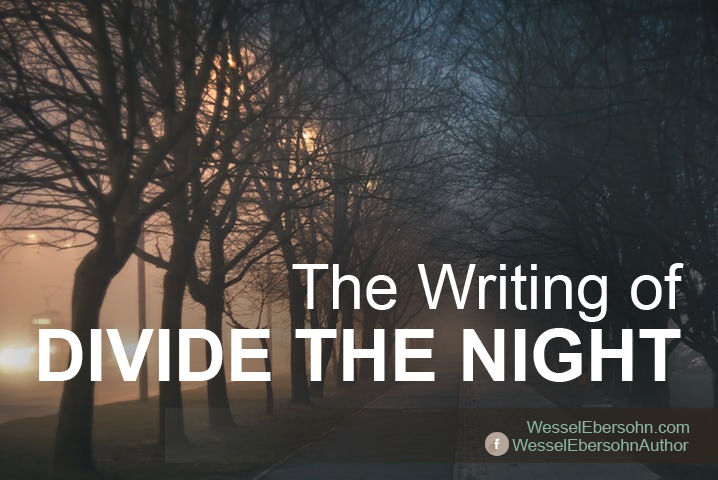 This is the story of the writing Divide The Night.

This book, like almost all my books are based on fictionalised true events and real people. And this is the story behind the story.

A kilometre or less from the small apartment Miriam and I occupied in Joubert Park, Johannesburg, when we were first married, was an insignificant convenience store. It was situated on the corner of a busy road and a quiet tree lined lane and was owned by a certain Harry Sam. It was manned by himself, his wife and perhaps other family members. In the South Africa of those days such stores were commonly called corner cafés. They were not cafés, but the regulations were such that having one or two small tables with chairs and calling themselves cafés allowed them to sell fast food and cold drinks.

At that stage Sam must have been in his sixties, as insignificant as his establishment. He and his shop possessed just one remarkable aspect. His store room behind the shop had a door that opened into the quiet lane and this had been the scene of eight killings, all of them by Sam himself. In every case he told the police that the person he killed had been breaking into his store room. In every case he hid behind the provisions of the Criminal Procedure Act, which allowed the use of reasonable force to defend yourself against intruders. One of the cases involved an eleven year old girl who, in death, seemed to be clutching a hammer with which she had allegedly threatened Sam.

Other shop owners in the area did not experience anything like the same number of intruders. Some locals claimed that Sam left his store room door open to lure in the hungry and unsuspecting. The only penalty ever imposed, was that after one incident his gun was taken away for five years. The moment it was returned to him, the killings started again.

It was at this point that I decided to write the story and started to investigate the rumours. For about a week, every night at around nine o’clock, I parked in a dark spot, deep in the shade of a tree, about 50 meters away from the store room door and waited. On the last night I did not have to wait long. Around ten Sam opened his store room door and came outside. He looked up and down the street a few times and then went back inside. I noticed that there was a large dog with him. And sure enough, he left the door slightly ajar when he went back inside.

After a few minutes, I quietly got out of the car and strolled, what I thought was nonchalantly, to the door and peeped inside. All I could see was piles of Bakers biscuit boxes, I pushed the door to get a better look. It was a typical store room with boxes of groceries stacked on each other. Suddenly my eye caught a movement in the semi dark of the store room, it startled me and accidentally I touched one of the biscuit boxes, it fell to the ground. I realized that it was empty. Then I saw the dog, looking at me for just a second, without making a sound and then he left the store room and went quietly up the stairs to the apartment above the store where the Sams lived.

I was barely back in the car when Sam and the dog appeared in the doorway. In the faint light from the street lamp that filtered through the leaves it looked to me like he had a gun in his hand.

I was puzzled by the strange behaviour of the dog. I decided to investigate further.

The next day I returned to the shop and bought a cold drink. While there I noticed the dog and I said to Sam that it was a beautiful animal. He told me proudly how well trained his dog was and that he sleeps in the store room at night and he was trained to quietly come upstairs and wake him if there was a burglar. That way he can catch them in the act.

He also told me with great pride that he was married to a relative of JG Strijdom, the country’s second Apartheid prime minister, who had died a few years before. Strijdom was an educated man, an advocate of the Supreme Court, and was probably barely aware of Sam’s existence.

Many years later, Sam died, still a free man. In the place where his shop was there is a large office building today. I can’t help but wondering, how many people still remember those that he killed.